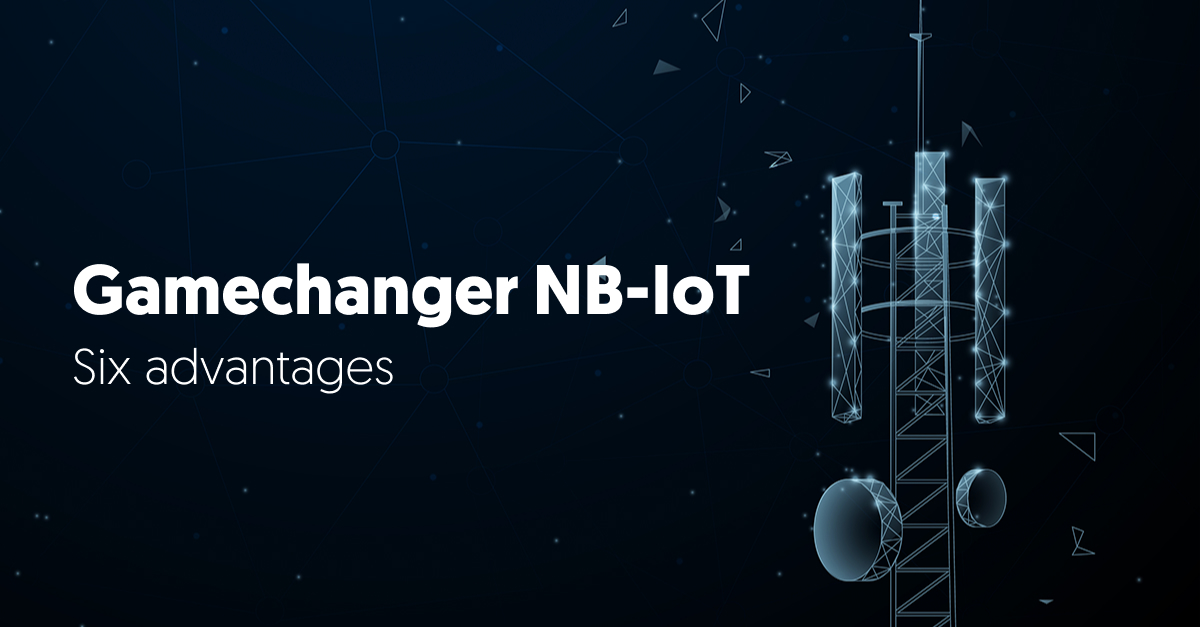 The benefits of narrowband IoT are reflected in multiple aspects. Briefly summarized: NB-IoT can be used to send and receive small amounts of data from IoT devices at a low cost point. This is done in a particularly energy-efficient manner, enabling long-lasting battery operation. NB-IoT also has good area coverage due to the frequencies used. In addition, Narrowband-IoT inspires with a good building penetration all the way down to the basement. The technology is available from many network operators, ensuring excellent international coverage. In the following, we explain the benefits of Narrowband-IoT in detail.

When introducing narrowband IoT, all relevant elements should be evaluated in the cost analysis. These are the communication costs, the hardware/modem costs, and the relevant operating costs. Let’s start with the good news: Narrowband IoT impresses in all dimensions of consideration with a cost-effective application, especially in comparison with conventional cellular mobile communications. Communications costs are very low compared to traditional cellular. As a result, installation is now often economically viable even in devices where this previously failed due to the monetary cost**. The hardware costs are considerably lower compared to LTE / 5G nets. This concerns the modems but also the additional components that are needed. Modern system-on-a-chip (SoC) solutions have powerful dual-mode modems in a fingernail-sized package space.

In addition, a powerful microprocessor (ARM Cortex M33 class) is also found for NB-IoT and LTE-M. The latter convinces with sufficient main memory and extended hardware security features. In terms of operating costs, two major benefits contribute to cost reduction. In Germany, for example, a “fallback” to the network of another mobile carrier is already included in the price. This “national roaming” creates the necessary redundancy in network operation. The main cost driver, the cost block for maintenance, is also optimized because battery runtimes are maximized due to low energy consumption. This has a direct impact on the financial parameters in the life cycle. Due to the high replacement costs of batteries, their lifetime often limits the lifetime of the entire device. Significantly extending the operating time can lower the product price and thus enable new applications. grandcentrix has its own Connectivity Board for existing products in its portfolio.

In terms of energy efficiency, narrowband IoT is significantly superior to classic mobile communications (2G/3G/4G/5G). IoT applications generally function like a transmitting sensor that transmits sensor data every couple of hours. Such a sensor can be in sleep mode for hours. In this respect, it only wakes up to check incoming data and upload it every few hours. This process is called “paging.” This increases energy efficiency by a multiple. To improve the battery life of IoT devices, the power-saving mode PSM (Powersafe Mode) was introduced in 3GPP Release 12. PSM is similar to simply “powering down.” The exception is that the device remains registered on the network even in this unreachable state.

The use of PSM results in reduced energy consumption, as the energy-intensive, regular re-logging into the network is no longer necessary. The devices only require energy when data is being sent or received. Therefore, they are in powersave mode most of the time. Depending on the application, battery runtimes of more than ten years can be achieved. When using PSM, however, it should be noted that devices in PSM state cannot receive external data. So you have to know when exactly the device will wake up again in order to then communicate data to the device. To enable this more elegantly, Discontinuous Reception (DRX) was evolved to eDRX. The goal was to further reduce power consumption and extend battery life. An advance that is especially beneficial for use in smartphones and other LTE devices.

In NB-IoT, eDRX allows the IoT device to sleep for a long time and wake up periodically to check paging. In doing so, the duration of the sleep state can be configured in eDRX. This saves a lot of power, unlike traditional DRX. For eDRX to work, there must be perfect time synchronization between the IoT device and the network. The network in question must support eDRX. Thus, both methods can be used to achieve a long deep sleep of the devices and thus a significant energy saving. Always with the simultaneous possibility of receiving data from the device on a regular basis and also sending data to the device.

Narrowband IoT operates in two frequency bands in Europe - 800Mhz (Band 20) and 900Mhz (Band 8). The low frequency of NB-IoT means that the signals have a long range. This means that good area coverage can be achieved with just a few radio cells. The low wavelength also enables high building penetration. This makes Narrowband-IoT the ideal transmission standard for use cases within objects. The same applies in other locations where undisturbed reception can otherwise not be guaranteed. **The signal also penetrates through thick walls and into basement rooms, a feature that is a benefit for smart metering, for example, i.e. intelligent electricity, water or heat supply. The only requirement for operating an IoT platform is a good Internet connection.

Before narrowband IoT was ready for the market, it was common practice to set up a “fallback” as a safeguard when using 3G and 4G for data transmission. In this, a digital safety net was set up in case of network disruptions or radio holes. When using NB-IoT, this “fallback” is already automatically in place through the networks of other service providers. This means that an IoT device automatically logs on to network operator B in the event of a network disruption from network operator A. If LTE-M is also available in the affected region, this network can also be used as a additional fallback option without any problems. If the hardware used (modem) supports this, the manufacturer’s firmware can be configured accordingly.

In tenders, it often happens that a 2G fallback is still requested out of historical reflex. However, this is not necessary and is also counterproductive, as it negates many of the LPWAN benefits described. Specifically, the following challenges arise. While there are currently combo chips for NB-IoT and LTE-M, 2G must be supplemented via a corresponding module. Combo chips generically support both standards. However, the hardware costs for modem operation are doubled. In addition, 2G takes place in a different frequency band. Thus, the bill of material (BOM) is further burdened by an additional antenna.

However, the decisive factor is that 2G has not been designed for energy-saving operation. In the case of a transmission via the 2G modem, considerably more energy is required. Especially in the case of battery operation, the battery life can no longer be guaranteed. In addition, the GSM technology on which 2G is based requires considerable pulse currents. Current battery chemistry technologies with long lifetimes, especially those that are not rechargeable, cannot deliver these. In general, IoT security is high and protected by application over the network services of international cellular carriers. So the implementation of narrowband IoT is equivalent to the introduction of an integrated security solution - with excellent functionality throughout.

The technology standard Narrowband IoT has been targeting mass applications since the development phase. IoT devices do not have to re-register every time the connection was interrupted. They continue to be known to the network as subscribers even in the event of disruptions. Compared to conventional mobile communications usage by other end devices, this results in a significantly reduced network load. Many more terminals can be managed in individual cells than is the case with conventional services (2G/3G/4G).

This also makes it easy to deploy large-scale applications in individual locations (e.g., small-scale rollout of sensor technology in smart city applications). Congestion on the data highway is thereby avoided. The solution toward ease in network operation of IoT applications is: cloud computing. The data volumes called up in each case are bundled in the cloud and can thus be retrieved regardless of location and time. A cloud interface responds in real time. With the right configuration of your infrastructure and a corporate network with edge computing, you can secure your IoT data holistically. Monitoring on the IoT platform is crucial here. The focus is on various security and data protection features.

Benefits of NB-IoT 6: Security and reliability in everyday business

Unlike other LPWA networks such as LoRaWAN, Narrowband-IoT is a licensed cellular standard. So NB-IoT has all the security and privacy features of cellular networks. These include data integrity, confidentiality or secure authentication. In addition, the NB-IoT standard provides for optional DTLS (Datagram Transport Layer Security) as a further encryption option for data transmission via a UDP (User Datagram Protocol).

The simpler online protocol Transport Layer Security (TLS) is not suitable for UDP data transmission, since none of the packets that follow after a packet loss can be authenticated. However, the way DTLS works is largely the same as TLS for data transmission via a TCP (Transmission Control Protocol). This avoids that an implication leads to a major change of the original protocol regarding the security of the new protocol. DTLS has been standardized according to RFC 4347 and is used in practice, for example, in VPN protocols such as Cisco AnyConnect. grandcentrix works together with Vodafone on the leading solutions for Narrowband-IoT. In the joint alliance, we also realize your idea of the “Internet of Things”.