The Internet of Things (IoT) brings countless functions and advantages when it comes to connecting devices and machines. This requires a corresponding infrastructure as a basis. One of the most commonly used technologies is LPWAN.

Definition: What does LPWAN mean?

The term LPWAN is an abbreviation and stands for “Low-Power Wide Area Networks”. It generally describes wireless networks with low-energy consumption and a long range. The bandwidth for transmitting information is extremely low for such networks. On the other hand, they have a long range compared with other types of network such as WLAN. The use of such networks is designed to connect devices over a long range with deep building penetration at low-energy consumption. Within the connection, information is transmitted at a low volume. 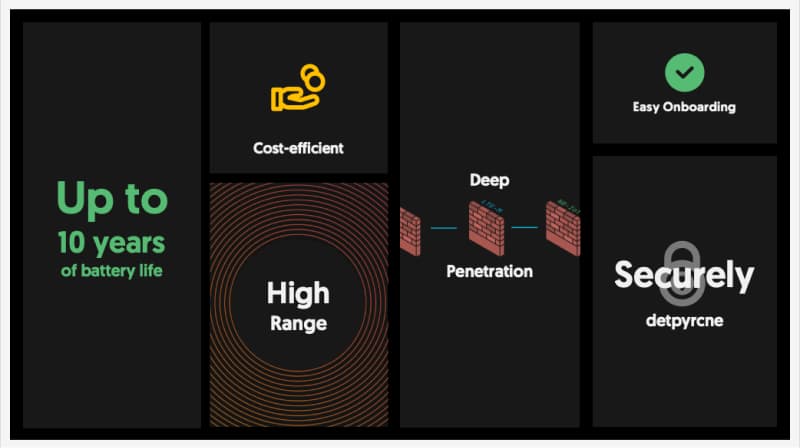 Similar to networks using narrowband IoT, all other LPWAN technologies are built on narrow bandwidth. Thus, only low bit rates can usually be transmitted. Consequently, such IoT networks are particularly suitable for connecting devices that do well with low information and higher latency. These are, for example, battery-powered sensors and radio modules that have a particularly long service life. LPWA networks are therefore less suitable for commercial consumer applications such as audio and video transmission. The focus is clearly on IoT applications and IoT devices, as well as machine-to-machine (M2M) communication. The basic structure mostly consists of a star topology. This means that each paired device is connected to a central control device (central access point).

LPWAN is representative of a group of low-power wide area networks with diverse variants. The most common types of LPWAN technologies include NB-IoT, Sigfox’s UNB, and LoRa Alliance’s LoRaWAN.

The NB-IoT (Narrow Band-Internet of Things) represents a radio standard in the field of LPWAN. As the name suggests, these standards are used for data transmission on the Internet of Things to connect machines and machine elements (i.e., IoT devices) with servers. The main difference between NB-IoT and other LPWAN are different frequencies and communication protocols for transmission, energy consumption, and specifics regarding bandwidth and range.

The UNB from the French company Sigfox is a radio network that is used worldwide. It is proprietary, unlicensed, and is one of the most widely used networks in IoT. It is an ultra-narrowband technology and operates in frequency ranges from 868 to 902 MHz. In environments with clear visibility, transmissions with Sigfox are theoretically possible within 1,000 kilometers. In practice, however, there are many disadvantages for users: there is little or no opportunity to participate in the further development of the standard, and institutions such as the German Federal Network Agency are not charged with the task of dejamming the network. This can lead to susceptibility to malicious attacks and thus make one’s own applications unstable.

LoRaWAN is also an unlicensed network and is operated by the LoRa Alliance, an association of up to 500 companies. It is less susceptible to interference because it operates in the sub-gigaherz range. It is based on the so-called MAC layer protocol, which controls communication between IoT applications and IoT devices and the corresponding gateways. LoRaWAN is used widely, especially in connecting sensors because packet sizes can be defined concretely, unlike in other LPWAN.

Other well-known LPWANs besides Sigfox and LoRaWAN are the Weightless NarrowBand IoT Networks, which were launched by the Weightless SIG (Special Interest Group) organization. The three standards include the unidirectional Weightless-N, the bidirectional Weightless-P, and Weightless-W. The latter standard has the shortest operational lifetime, which is why other typologies are more popular. The major advantage of these networks is the ability to operate in the unlicensed and licensed range of narrowband technologies.

The application area of LPWAN is also steadily increasing due to the growing importance of the IoT. In the field of logistics and warehousing, corresponding applications have already been indispensable for many years and are leading to increasingly efficient supply chains.

Regarding water and energy supply in rural regions, LPWA networks have also unlocked great potential. Targeted and demand-driven control is possible even in the most remote areas due to their large range and long service life. Smart metering also leads to more efficient business processes, as the automated transmission of sensor values can reduce the need for service personnel.

But also in terms of smart cities, corresponding IoT networks are the basis for further connectivity and development. However, the actual potentials are far from being exhausted because the understanding of the technology is just emerging.

Advantages of LPWAN use

“Low power” and “wide area” - the two main advantages, are already concretely defined by the network name. Finally, the low-power consumption accounts for the longevity of such networks. The long range is in perfect harmony with this because it means that devices can remain connected over huge distances for many years without the need for intervention.

Depending on networks, the lack of licensing costs adds to the attractiveness of some LPWANs. Procedures for approval and regulation usually proceed within a manageable framework. This enables a rapid roll-out of technologies with few risks.

In summary, some compromises have to be made in terms of transmission rates and the variety of modules that can be connected. On the other hand, high ranges and reduced energy consumption are possible.

Theoretically, attacks by hackers are possible in all types of networks, including the Internet of Things. However, the actual disadvantage of LPWAN technology, its low bandwidth, turns out to be a particular advantage in this case. In addition, the connected objects are rarely attractive to be attacked by hackers.

LPWAN therefore does not normally pose any major security risks. Nevertheless, caution is always advised. For this reason, we recommend that our customers use encryption such as DTLS and TLS in numerous instances. Again, the narrow bandwidth is a solvable challenge because corresponding applications usually require a minimum transmission rate. Ultimately, the issue of security for LPWAN is one which can be viewed from two perspectives.

What does the future hold for LPWAN technology?

The potential of IoT networks is growing rapidly in business and society. After digitalization, companies are increasingly focusing on connectivity, especially in the industrial sector. LPWA networks are a new variant and are still undergoing constant development. Nevertheless, it is important to jump on the bandwagon now and take full advantage of the opportunities offered by the Internet of Things.

With the IoT experts at grandcentrix, your business case can also benefit from this change. Contact us today and let us advise you without obligation.